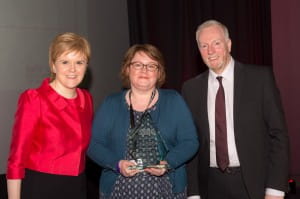 The Scottish Trades Union Congress (STUC) has announced that the recipient of the 2017 STUC Equality Award is Sharon Sweeney, President of the University and College Union (UCU) Branch at the University of Dundee.

Sharon has been an active trade union representative for a number of years within the Dundee UCU Branch Committee. Sharon has pursued the disability equality agenda, and through negotiations with her employer, successfully negotiated a Disability Leave Policy (one of few in Higher Education Institutions). The policy includes provision of disability leave in long term absence policies, so that disabled staff are not penalised or subject to unfair absence management procedures within the sickness absence process,

Following the agreement of this policy, Sharon then instigated a UCU training session together with UCU’s National Head of Equality, and the Human Resources Director of Dundee University, to show the positive outcomes for good negotiations and best practice around Disability Leave policies.

The award was presented by the Rt Hon Nicola Sturgeon, First Minister of Scotland and Leader of the Scottish National Party, at STUC Congress on 24th April 2017.

“Sharon is an extremely worthy winner of the STUC Equality Award in 2017. Her work in challenging inequality in her workplace and supporting others in her workplace, her union’s national structures and the wider trade union movement through the STUC Disabled Workers Committee throughout her years as a trade union rep.”

“I was delighted to be nominated by my union, UCU, for this award. Without my colleagues’ support within UCU and the wider trade union movement, I would not have been able to progress as much of the work that I have achieved. I care about equality passionately, particularly the intersectionality of the equality agenda.”

“Sharon is an exemplar of what union equality officers should be. Always prepared to add her voice personally to helping combat inequality, and doing this in a way that can win support, not only from those already committed to the cause, but also from those needing convinced of the argument”

Pam Milne, Head of HR and Organisational Development at the University of Dundee said:

“I, personally, am delighted for Sharon to receive this recognition from the STUC. It’s so well deserved. The Disability Leave Policy been a really important piece of work for the University which has been really appreciated and really successful.”