Learner of the Year Award 2012 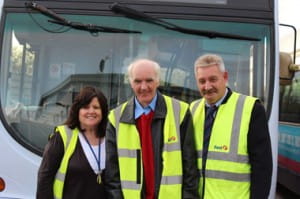 The recipient of the second Learner of the Year Award was Robert Higgins, a cleaner at the FirstBus depot in Blantyre since 2005. Robert is a member of Unite the Union, and earlier this year, he approached his Union Learning Rep, Ewan McLean, in the workplace learning centre for help with his literacy and numeracy skills.

“I never went to school,” Robert said. “I could not read or count and would be lucky to recognise numbers above 15, but there was nothing wrong with my work ... I just remembered the buses I had cleaned by memory instead of filling out a checklist.”

In April, Unite the Union arranged for Adam Smith College to provide a tutor once a week to attend the First Learning Centre in Blantyre to assist the staff with literacy and numeracy. This was arranged through support from the Development Fund, and Ewan, as a Unite Learning Rep, encouraged Robert to attend.

Ewan said: “I encouraged Robert to come along to the weekly sessions in the Learning Centre. On his first day, I introduced him to the tutor and gave her a bit of background to his situation. Mainly, he was unable to deal with money and every time he would go away from home on a trip, his partner had to split up his money into bags with exact money: one for the hotel, one for the train, and one for spending money, as he was unable to work out the cost and what change he should receive.”

Robert has reacted positively to informal learning at work in a non-structured environment. Robert said: “At first, I was a wee bit scared, but you don’t get treated like a child - you get treated like an adult. They show you how to do things the best way, and if you make a mistake, they help you go through it again and again. The support from my tutor and union has been just amazing.”

Ewan said: “The progress Robert has made is simply outstanding! He is working on measurement and time and he has added ICT skills to his learning plan and bought his own laptop. You can really see the difference union-supported learning has made to his self-confidence. He’s talking to more people in the depot and is really enjoying his work a lot more.”

When asked what difference workplace learning support from his union has made to his life, Robert said: “I cannot believe I can do this now, after all those years of hiding it from friends, colleagues and my son. Now I can recognise the fleet numbers on the buses and when I go away on my yearly trip, I can manage my own money.”

Robert was presented with the award by Grahame Smith, STUC General Secretary, at the Scottish Union Learning Conference in Falkirk on Wednesday 14 November 2012. Upon receiving the Award, Robert said: “I can’t believe it. If my learning story even helps one person to do the same thing and access learning, all of this will be worth it. This has been the best year of my life.”

Grahame Smith, STUC General Secretary, said: “Robert’s story is truly inspirational, and is a wonderful example of the value of trade unions to their members and society. The support of his Union Learning Rep, Ewan McLean, his tutor and Unite the Union has been crucial in helping Robert to make this remarkable achievement and provides motivation for others like him in workplaces throughout Scotland to explore and maximise their true potential.

“The work of all trade unions in supporting learners in the workplace should be applauded, and congratulations are due to the many thousands of workers who undertake learning journeys throughout Scotland each year with the support of trade unions.”

Jim Aitken, Unite Scotland's Education Officer, said: "What Robert has achieved is nothing short of outstanding and his story epitomises everything that is good about trade union learning.

“The programme Unite has put in place with First has been a major success and the hard work put in by our team of Learning Organisers, ULRs and tutors is reflected in Robert's progress too.

“Robert is a powerful example of how education can help transform lives; everyone at Unite is proud of him and this Award is richly deserved."

Linda Guthrie, FirstGroup Head of Learning and Development, said: “I met Robert recently when his achievements were recognised by FirstGroup and Unite the Union at our annual Trade Union Learning Rep Conference. It is fantastic that his hard work, determination and willingness to learn have also been recognised by Scottish Union Learning.

“FirstGroup is rightly proud of Robert and the efforts of individual staff and Union Learning Reps across Scotland. We continue to work in partnership with Unite the Union to ensure that workplace learning is an integral part of our strategy and look forward to seeing many more of our staff and ULRs get the recognition they deserve for their outstanding achievements in lifelong learning.”

Kevin Clark, Director of the Catalyst for Productivity ESF project run by Adam Smith College, said: “Robert is a great example of what can be achieved by taking the first step, followed by loads of determination and sheer hard work. He is exactly the kind of success story projects like Catalyst for Productivity are designed for. This award recognises his efforts; the Scottish Union Learning 2012 Learner of the Year is high praise indeed. What an achievement!

“All of us at Adam Smith College wish Robert every success in the future and look forward to seeing him progress onto even greater achievements. Well done, Robert.”