The Open University in Scotland

The Scottish Trade Union Congress (STUC) and The Open University in Scotland signed a renewed Memorandum of Understanding on 19 April 2021, setting out a range of collaborative activity which will open up training opportunities for the 540,000 Scottish workers who are trade unionists, the members of 39 affiliated trade unions and 20 Trades Union Councils.

Shared goals include applying learning in the workplace through upskilling or reskilling; enhancing career development; and providing opportunities to those who have previously benefited least from education and training.

The strategic partnership between the STUC and The OU in Scotland was solidified in 2007 with the signing of the first Memorandum of Understanding. This agreement enabled partnership working between Scottish Union Learning and The Open University to facilitate group-based higher education in the workplace, creating a specific pathway to higher education for trade unions and their members.

The Open University provides modules and, in some instances, structured pathways on to degrees or intermediate qualifications. The OU has also delivered non-accredited workshop-based courses to hundreds of union learners.

“Scottish Union Learning is proud to work with The Open University in Scotland. By working in partnership, we are able to offer a range of learning opportunities to workers across Scotland.

"We can also support workers who have been furloughed, those at risk of redundancy, or who have already lost their jobs due to the pandemic. Union learners can benefit from a range of short courses to longer-term development programmes that can improve their skills and employment opportunities.” Wendy Burton, Director of Scottish Union Learning

The virtual signing of the renewed Memorandum took place at the Scottish Union Learning STUC Congress Fringe Event, STUC & The Open University in Scotland: Organising learning for a fairer future.

“The signing of this Memorandum of Understanding between The Open University in Scotland and STUC underlines our commitment to supporting workers in developing their skills for a fairer future.

"The STUC looks forward to many more years of working in partnership with the OU in Scotland to ensure crucial learning opportunities are open to working people from across Scotland.” Rozanne Foyer, STUC General Secretary

Since opening in 1969, The Open University has educated more than two million people worldwide, more than 200,000 of whom have been Scots. It has students in every Scottish Parliamentary constituency and recently published a prospectus for the Scottish Parliament called Skills+ Scotland, setting out key themes to galvanise higher education to support an inclusive recovery from the COVID-19 pandemic.

“Today’s launch of the Memorandum of Understanding with the STUC sets out our future goals with skills-based learning at its heart. A renewed focus on learning, reskilling and upskilling is vital as the nation recovers.

“We are proud to have worked alongside the STUC, Scottish Union Learning and trade unions to deliver a wide range of learning opportunities from short courses through to digital skills, all of which support people to gain new opportunities in the workplace.

“Three quarters of all OU students work full or part-time and our flexible courses make it easier for people from all backgrounds who have busy lives to access learning.” Susan Stewart, Director of The Open University in Scotland

In 2017, the STUC announced that the recipient of the 12th Annual STUC Helen Dowie Award for Lifelong Learning was Brian Ronald, a Unite Union Learning Rep at Rolls-Royce Inchinnan.

Brian works as an Engineering Inspector and is the Lead Union Learning Rep at Rolls-Royce Inchinnan. Brian was instrumental in setting up a unique learning partnership organising the Open University degree programme that runs at Rolls-Royce in conjunction with Unite, Rolls-Royce, Scottish Union Learning and the OU. The unique funding arrangement between the union, employer, and learning provider has provided members at Rolls-Royce the opportunity to study for a degree at a time that suits them, at their own pace, and at a fraction of the cost of achieving a degree as a regular part-time learner.

At the time of the Award, 30 learners registered on the OU pathway at Rolls-Royce. Brian was the first to graduate with a Bachelor of Science (BSc) Open degree in October 2016. As a Union Learning Rep, Brian has also organised other courses in 17th Edition Wiring, AutoCAD and photography for members in the workplace with the support of the Learning Fund through Scottish Union Learning.

Sponsored by The Open University in Scotland, and administered by Scottish Union Learning, the award was presented by the Rt Hon Nicola Sturgeon, First Minister of Scotland and Leader of the Scottish National Party, at STUC Congress on 24th April 2017. Suzanne Cullinane, Unite Learning Organiser, accepted the award on Brian's behalf as he was unable to attend.

Business Management through the Highlands and Islands Learning Fund 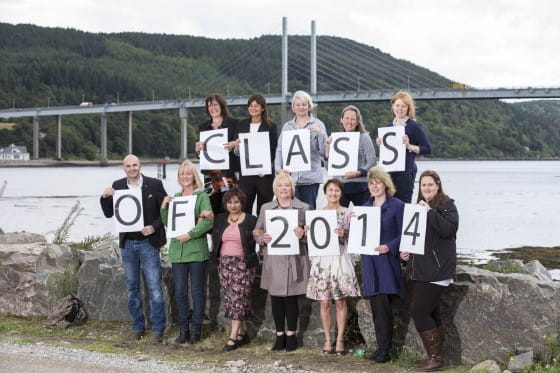 In 2012, 15 workers from Orkney to Argyll were selected from over 40 applicants who were keen to take the opportunity to gain a higher education qualification to improve their career prospects.

The CHEO course comprised four modules at SCQF level 7 and concluded in October 2014. Of the 15 learners who embarked on the two-year learning journey, nine gained the full Certificate and four gained a part qualification. Key to this success was the partnership between Scottish Union Learning and The Open University (OU). In October 2014, after two years of study with the Open University, the first class of HNC-level learners supported by Scottish Union Learning in the Highlands and Islands received a Certificate in Higher Education Open (CHEO) in Business Management course, paid for by the Highlands and Islands Learning Fund, which was then funded through the European Social Fund.

For more information about our work in the Highlands and Islands, email Craig Finnie, Development Officer.

Learning in the Time of COVID-19

Open Educational Practices in Scotland: Short courses This collection has a number of short courses and articles which will help develop your understanding, skills and knowledge of online learning and how to facilitate online learning opportunities.

OU Microcredentials case study - Tommy As part of our combined responses to the COVID19 pandemic, SUL has worked with trade unions and the OU in Scotland to support union learners in accessing the new suite of Open University Microcredentials.