The Helen Dowie Award for Lifelong Learning recognises outstanding trade unionists who continue to demonstrate their commitment to union values and lead the learning movement forward in Scotland.

The award is named in honour of Helen Dowie, who was involved in the trade union movement in Fife for most of her adult life. She worked in Rosyth Dockyard for twenty years and was active within the civil service unions. Through her union, Helen organised the yard, campaigned on initiatives and supported many workers. She took the union into the community through the organisation of the Rosyth Festival and music events, highlighting important union campaigns.

Along with her partner, Mike Morris, Helen started the Trades Council News in Fife. By writing, printing, editing and distributing the newssheet, Helen and Mike kept union members aware of the issues and also spread the word more widely throughout Fife. Helen and Mike made many solid friendships through their union involvement.

Helen worked to support the development of education and learning in Scotland. She was a key player in supporting the development of the lifelong learning agenda that union members know today, and she worked hard to secure financial backing to support unions in developing the role of the Union Learning Representative.

Helen’s life was devoted to supporting others through the trade union movement, and her untimely death was mourned by trade unionists throughout Scotland. This award commemorates Helen’s lifetime achievements in lifelong learning by recognising other trade unionists who work to champion union learning in Scotland. 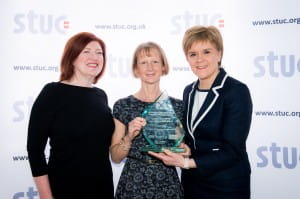 The Scottish Trades Union Congress (STUC) has announced that the recipient of the 11th Annual STUC Helen Dowie Award for Lifelong Learning is Julie Atkinson, an Aegis Union Learning Rep (ULR) at Aegon UK in Edinburgh.

Sponsored by Skills Development Scotland, and administered by Scottish Union Learning, the award will be presented today (11.00am on Tuesday, 19 April, Caird Hall, Dundee) by the Rt Hon Nicola Sturgeon, First Minister of Scotland and Leader of the Scottish National Party.

Julie Atkinson became a ULR to support her fellow workers to gain access to learning and development opportunities within the workplace. The union, in partnership with the employer, has now established a learning programme in which Julie plays a crucial role. With access to the funding provided by Scottish Union Learning, Julie has organised a wide range of courses which have been delivered in the workplace, ranging from basic Excel courses to PRINCE2 Project Management courses. 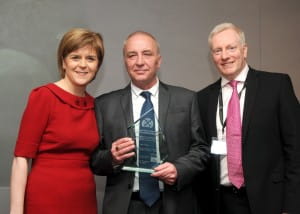 Unite the Union ULR and Convenor

The recipient of the 2015 STUC Helen Dowie Award for Lifelong Learning was Billy McKay, a Union Learning Representative and Convenor for Unite the Union at BAE Systems. Sponsored by SQA and Skills Development Scotland, the award was presented at the STUC Annual Congress by First Minister Nicola Sturgeon MSP.

Billy has delivered learning opportunities for members in BAE’s Govan and Scotstoun yards, as well as Rosyth, Barrow-in-Furness and Portsmouth. He has integrated learning into collective bargaining within BAE Systems, and has successfully negotiated a 50-50 split in paid time off for member-driven learning opportunities. Led by Billy, Confederation of Shipbuilding and Engineering Union (CSEU) ULRs have brought learning into the workplace, facilitating a return to learning for hundreds of non-traditional learners.

The recipient of the ninth annual STUC Helen Dowie Award for Lifelong Learning is Willie Brennan, a BFAWU Union Learning Representative at Dawnfresh Seafoods in Uddingston.

Sponsored by the Scottish Credit and Qualifications Framework Partnership (SCQF), the award was presented on Wednesday 16 April 2014 at Perth Royal Concert Hall by Johann Lamont MSP. 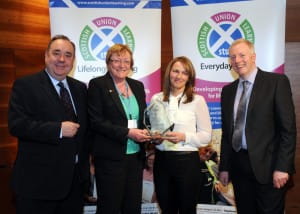 The recipient of the Helen Dowie Award for Lifelong Learning 2013 is Sonya Cassidy, a Unite Union Learning Representative at the Royal Bank of Scotland Mortgage Centre in Greenock.

Sponsored by Inverness College UHI, the award was presented on Tuesday 16 April 2013 at Perth Concert Hall during the STUC Congress by First Minister Alex Salmond MSP. 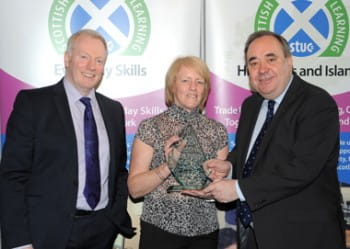 Diageo Kilmarnock was the home of Johnnie Walker Whiskey. After the employer announced controversial plans in late 2009 to close the Kilmarnock plant, Janette was in the forefront of fighting to save the hundreds of jobs at the site.

Upon being elected as the Site Convenor in 2010, Janette put her organising abilities and dynamic style into action as she became the driving force behind supporting members through the ‘ins and outs’ of the redundancy situation.