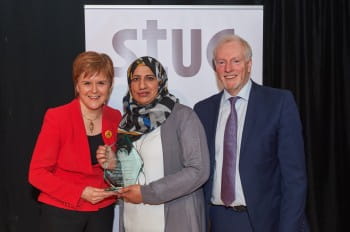 The recipient of the 2019 STUC Equality Award is Khadija Mohammed, EIS, who is a Lecturer in Education at the University of the West of Scotland.

The Award, which is sponsored by Skills Development Scotland, was presented by the Rt Hon Nicola Sturgeon, First Minister of Scotland and Leader of the Scottish National Party, at the STUC Congress in Dundee on Wednesday, 17 April 2019.

Khadija has been a driving force behind a wide range of work to tackle race discrimination and promote race equality. She is the Founder and Chair of SAMEE, the Scottish Association of Minority Ethnic Educators, which plays a critically important role in ensuring a genuinely inclusive education system in Scotland.

Khadija is highly motivated, and through her experiences of education, EIS membership and postgraduate study, she is committed to promoting and providing opportunities for coaching and mentoring, leadership and teacher activism for BME teachers wherever possible.

Khadija has developed a coaching and mentoring programme for minority ethnic teachers with SAMEE colleagues. This programme has now been delivered to over 50 participants.

Women from BME backgrounds and Muslim women are extremely under-represented in trade union structures in Scotland. Khadija has been a trailblazer in this regard.

She has spoken publicly about being challenged about her faith, for example, and specifically about wearing the hijab (with some colleagues making assumptions about what that represented).

Grahame Smith, STUC General Secretary, said: “We were aware some of Khadija’s work on equalities through her role as Vice Chair of the STUC Black Workers’ Committee, however, the wider impact of her commitment and drive is now apparent. Her work in developing a coaching and mentoring programme for BME teachers and the promotion of women from BME backgrounds and Muslim women within trade union structures makes her a very worthy recipient of this award.”

Khadija Mohammed, Recipient of the 2019 STUC Equality Award, said: “I’m delighted to receive this award in recognition of all the good work that goes on around social justice and equality in workplaces.

“I think in moving forward it’s really important that we encourage everyone to engage in honest, critical conversations around social justice, race and equality issues.”

Larry Flanagan, EIS General Secretary said: “We are very aware from Khadija’s work that there’s a distinct lack of BME teachers, so to have someone like Khadija who has brought professional expertise but also lived experience to the discussions that we are having, really aids the work that the EIS is doing.

“I think Khadija’s work on equality benefits the union, and in the longer term, will also benefit the profession and encourage more teachers from BME backgrounds to move into the classroom.

“The EIS warmly congratulates Khadija on receiving this award from the STUC.”

Damien Yeates, Skills Development Scotland Chief Executive said: "SDS is delighted to congratulate Khadija on the recognition of her work on equality, diversity and inclusion.

“It is vital to have people like Khadija in education, and the workplace, adopting a coaching approach with her colleagues and students. This award rightly celebrates her passion for making sure people are part of an inclusive environment.

“At SDS we are committed to equality, diversity and inclusion in all we do, and support the STUC in recognising educators like Khadija."

The video clip of Khadija's story can be viewed here:
114
b
« Later entryEarlier entry »