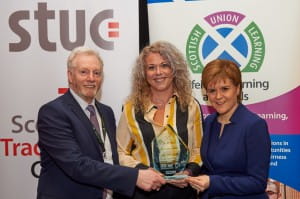 The Scottish Trades Union Congress (STUC) has announced that the recipient of the 13th Annual STUC Helen Dowie Award for Lifelong Learning is Lisa McGuinness, a FDA Union Learning Rep at HMRC.

Sponsored by The Open University in Scotland, and administered by Scottish Union Learning, the award was presented by the Rt Hon Nicola Sturgeon, First Minister of Scotland and Leader of the Scottish National Party, during STUC Annual Congress in Aviemore on Monday, 16 April 2018.

The FDA is the union for Senior Managers and Professionals in Public Service. Lisa McGuinness joined the FDA in 2004 and is currently a Union Learning Rep; a learning lead for HMRC in Scotland; and the FDA lead on Learning in Scotland. Lisa’s work to promote learning within HMRC has largely focussed on working with those from under-represented groups, such as women and BME workers. The FDA now has a core group of ULRs across Scotland, thanks to Lisa and her collective approach to learning. The Leadership Development Project that Lisa ran was so successful that it was rolled out nationally and in total, the union has engaged with over 450 women learners through this Project. Many of the learners who took part have gone on to be actively involved in the union.

Not only has Lisa developed a variety of high quality learning opportunities for her fellow workers, she has also implemented a mentoring project to support new learners. This has helped the FDA to recruit new members and develop new activists from minority groups. The growing cohort of activists that Lisa has been instrumental in developing is helping the FDA to build and organise in Scotland.

“We are delighted to choose Lisa McGuinness as the recipient of the Helen Dowie Award for Lifelong Learning this year, and we are particularly impressed with her commitment to supporting under-represented workers in accessing learning in the workplace. Workplace learning is a key feature of vibrant trade unionism and an area of work that the STUC is passionate about. As Lisa’s story shows, learning is a vital tool for building strong and well organised workplaces across Scotland.”

“I am immensely proud to receive this award which highlights the hard work of the FDA in Scotland over the last few years to develop and support our members in all aspects of leadership and resilience. Building capability in others and seeing them become the best they possibly can be is something that I feel passionately about, and it’s great to see that reflected in this award.”

Marie Hendry, Depute Director of External Engagement and Partnerships at The Open University in Scotland, said:

“We are delighted to be sponsoring this award, which recognises the crucial importance of lifelong learning and learning in the workplace. With around three quarters of our students working while they study, The Open University greatly values our partnership with unions and employers across Scotland.”

“Lisa has played a pivotal role in developing a more bespoke Scottish organising approach and enhancing the learning offer to FDA members as well as those of other unions.

“FDA membership growth in Scotland owes much to her and this nomination recognises both the union learning journey undertaken by Lisa and her role leading and engaging others.

“The FDA is proud of Lisa – and the growing group of Union Learning Reps that Lisa has been instrumental in helping us to build.”