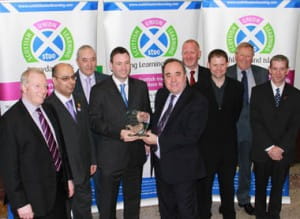 In September 2008, Unite and UNISON negotiated and signed a learning agreement with SPT. Learning and training have been incorporated into all the collective bargaining structures, and the policy negotiated by the reps – including 50% time off for learning – has been mainstreamed into company policy. SPT covers a wide geographical area and the ULRs have arranged the learning required on-site at shift-friendly times, including courses on night shift. All courses have been delivered free of charge to the workers, and have included vocational as well as social learning.

Due to progression routes, some union members have been on two or three courses. In 2009, there had been 2,138 hours of learning: 1,528 in company time, and 610 in the learners’ own time. Most of the learning takes place at Broomloan Depot in Glasgow, which is where the subway trains are maintained. Learning also takes place at Buchanan Bus Station and Consort House (SPT Headquarters and Admin Building).

The team was presented with the fifth annual award at the STUC Annual Congress in Dundee in April 2010 by First Minister Alex Salmond.