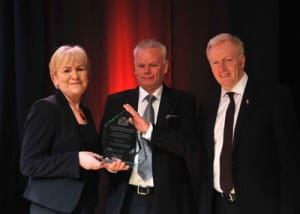 The recipient of the ninth annual STUC Helen Dowie Award for Lifelong Learning is Willie Brennan, a BFAWU Union Learning Representative at Dawnfresh Seafoods in Uddingston.

Sponsored by the Scottish Credit and Qualifications Framework Partnership (SCQF), the award was presented on Wednesday 16 April 2014 at Perth Royal Concert Hall by Johann Lamont MSP.

In what is a very harsh environment for all Dawnfresh employees, with some working in freezing conditions, jobs were generally perceived by locals to be a dead end, consisting of low skilled work in a seafood factory. Willie’s work in lifelong learning has turned this negative perception on its head, and has allowed many of his colleagues to undertake positive learning steps to enhance their long-term employability.

Willie persuaded management to recognise the importance of establishing a workplace learning steering group, whereby the BFAWU, the employer and Scottish Union Learning could meet to discuss learning and drive opportunities forward in the workplace. This was achieved through Willie’s tenacity at a time of tense industrial relations. As a direct result, there is now a route for employees to progress into management and other areas of work within the business. Additionally, in January 2014, the BFAWU organised a diversity course through the Learning Fund. The entire Dawnfresh workforce, some 260 employees, were given paid release to attend the course during their normal shifts.

Such is the success of the new learning partnership between the union and employer that it has raised the profile of the business. Marks and Spencer, a major client of Dawnfresh Seafoods, is using the partnership of BFAWU and Dawnfresh as a case study of good practice within the sector. Through his role as a ULR, Willie has transformed the way in which learning is delivered in his workplace.