Learner of the Year Award 2015 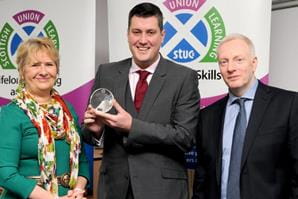 The fifth annual Learner of the Year Award was presented to RMT member Barry Weldon, who is a Travel Clerk based at Glasgow Queen Street Station. The presentation was made by Roseanna Cunningham, Cabinet Secretary for Fair Work, Skills and Training and Grahame Smith, General Secretary of the STUC, at the Scottish Union Learning Conference 2015.

Barry was chosen as the 2015 Learner of the Year because of his commitment to learning and equalities. He struggled at school, especially with English, and left aged 17, giving up his dream of going to university to work in the retail sector. Five years ago, he joined the rail industry, and returned to learning through his passion for equalities by undertaking a trade union equalities course organised by RMT at Glasgow Kelvin College. Experiencing some difficulties due to the high volume of reading, Barry suspected he may have dyslexia. He confided in RMT Union Learning Rep Mary Jane Herbison, who advised him to contact Scottish Union Learning. After initial discussions, Barry was referred to the Learner Support Co-ordinator at the College who organised a series of assessments and provided excellent support.

Barry was identified as having dyslexia, but found this liberating as it gave him an understanding of his difficulties, and hope for the future. With the assistance of software technology and reasonable adjustments made by his employer, Barry has made real progress in undertaking the TUC Diploma in Equalities, in addition to other courses facilitated by his union. As an Equalities Rep, he is using his own learning experience, and his increased confidence, to fight for equality and fairness in the workplace.

Barry has ambitions to work within railway operations logistics, and in October 2015 he enrolled on the Institute of Rail Operatives Certificate at Glasgow Caledonian University, which leads to a degree qualification. Barry is finally realising his dream.

RMT Learning Organiser, Dennis Fallen, commented on Barry’s achievement: “Barry is an inspiration in overcoming barriers, and has achieved so much. We are proud he has won this award, proud he is a member of RMT, and even more proud that he has used his learning to help others in his role as an RMT Equality Rep”.