Learner of the Year Award 2014 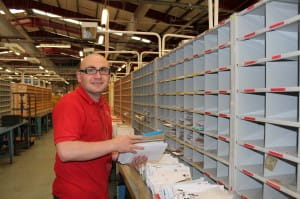 The recipient of the fourth Learner of the Year Award was Alasdair Maclean, a Communication Workers Union (CWU) member and Postal Worker at the Glasgow Royal Mail Centre in Springburn. Alasdair was chosen as the 2014 Learner of the Year because of his strong commitment to learning, despite his physical difficulties caused by Multiple Sclerosis (MS).

“I always wanted to be a postie,” says Alasdair. “My grandfather was a postman and I looked up to him. I worked as a delivery postman for a decade before I was diagnosed with MS. Since the disease meant I was not fit to carry out delivery duties any longer, I was asked to retire at 32 from the Royal Mail. I didn’t want to do that.”

Instead, Alasdair asked to be transferred from a Delivery Office to the Mail Centre in November 2012, and he began work in sorting mail. There, he joined the workplace learning centre, the CWU’s Key 2 Learn Centre, and met with a Union Learning Rep about what courses were available.

“I decided to undertake a four-week Digital Photography Course,” Alasdair said. “I was new to the Mail Centre, and the class provided me with an opportunity to meet and mix with colleagues.”

It was not a smooth introduction to learning for Alasdair. He had to overcome many problems in class, as MS means he suffers with balance issues and stiffness, especially down his left side. However, he never let the symptoms affect his positive experience. When the CWU organised an accredited computer course in ECDL (European Computer Driving Licence), Alasdair enrolled to build up his IT skills.

Alasdair said: “ECDL is the gateway to doing anything with computing, and instead of retiring I thought I’d go in another direction. I was interested in computing, so when my Union Learning Rep asked if I wanted to sign up, I decided to give it a go.”

He completed the first part of the course over thirty weeks, which consisted of three modules in IT User Fundamentals, Using Email and the Internet, and Security for IT Users.

MS means Alasdair struggles with his speed, which is a problem as ECDL tests have a time limit. Other issues include vision and bladder problems, which occurred during a timed test for ECDL, which meant he did not finish because of the interruption. However, Alasdair was determined to continue and he eventually completed and passed ECDL Essentials.

Alasdair said: “I enjoy the classroom environment, and the help and support from the tutors. I enjoy being part of a learning group and I’m grateful to the CWU and the Union Learning Reps for organising these courses.”

Despite his health difficulties, Alasdair has never missed a class. Such is his commitment to learning that he has come in to the workplace during his annual leave and time off.

Alasdair’s CWU Union Learning Rep, Paul Fee, said: “Alasdair was quite shy and quiet, but union learning has helped to bring him out of his shell. With every module that Alasdair completes, it boosts his confidence and self-belief, and any apprehension he first felt about learning has now disappeared.”

Alasdair continues to progress as a learner. He recently enrolled in ECDL Extras and has just completed the first of the four modules.

Upon receiving the Learner of the Year Award, Alasdair said: “I never thought I would be chosen as Learner of the Year, because I knew that there were a lot of people being put forward by different unions. I was shocked when my union told me that I won the Award.

“After speaking to others, I realise that the Learner of the Year Award is quite an honour. The Award gives me more confidence to go forward, and in completing the tests. I’m really surprised at how happy my colleagues, tutor and my Union Learning Reps are that I was chosen, but the best part is making my family proud.

“I’m really glad I wasn’t forced into retirement because of my MS and if anyone asked, I would tell them how great union learning is and about the support available through ULRs.”

Grahame Smith, STUC General Secretary, said:“The challenges Alasdair has overcome on his learning journey are remarkable. Union learning has given Alasdair a second chance at making his career and personal life more fulfilling. With the support of his CWU Learning Reps, Alasdair has come from being a shy and quiet person to developing into a dedicated learner who has never missed a class, even during his annual leave and time off.

“Despite his health difficulties, Alasdair is now fully engaged with union learning. With union support, thousands of workers across Scotland successfully undertake learning journeys every year and Alasdair is a shining example of how union learning is for everyone.”

Trish Lavelle, CWU Head of Education & Training, said "I am absolutely delighted that Alasdair's hard work and dedication has been recognised through him receiving this award. His MS, whilst providing its obvious challenges, hasn't phased him in the slightest and he has gone that extra mile to achieve his aims.

“Alasdair's success and the award provided makes the whole of the CWU proud of the positive difference that trade unions make, and central to the CWU learning strategy is the active participation our ULRs whose imagination and commitment have seen us deliver no less than 50,000 individual learning opportunities to working people like Alasdair in the UK over the last few years!

“A big thanks to the ULRs in Glasgow for organising his training and a big thanks to Alasdair for taking advantage of these courses and doing so magnificently well at them! Well done all!"