Learner of the Year Award 2017 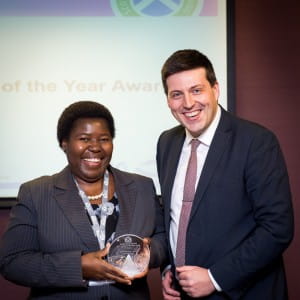 Priscilla was born and brought up in Zimbabwe, and worked as a solicitor there until life started to become challenging under the government regime of Robert Mugabe. In 2001, Priscilla came to the UK to study and make a new life for herself and her three children.

Whilst living in various places in England and Scotland, Priscilla worked in many jobs to make ends meet including working in a potato factory, ice cream factory, then as a cleaner, care assistant, and support worker for people with Learning Disabilities, as well as volunteering at the Citizens Advice Bureau. In 2005 Priscilla moved to Scotland, and whilst working as a Care Worker for Falkirk Council, she became a member of the local UNISON Branch, which supported her return to learning.

Priscilla currently works as a Support Worker for Stirling Council. She continued her learning journey by completing an HNC in Business Studies in 2004, and gaining her Masters in Law in 2007, all whilst caring for her children, holding down a job, and volunteering. In the last year, Priscilla has also completed UNISON’s Black Workers into Management Course, supported by the Learning Fund from Scottish Union Learning, and has now started a Chartered Management Institute Certificate in First Line Management through the Learning Fund. She is a UNISON Black Members Committee rep on UNISON Scotland’s Learning and Organising Committee, and is working closely with the UNISON Development Fund project.

When she decided to begin a full-time course in Social Work, Priscilla sought funding from the Scottish Social Services Council and voluntarily chose to change her job to part-time with Stirling Council to suit her vigorous study schedule. She will soon complete her MSc in Social Work from the University of Stirling, and hopes to work as a Social Worker in the future.