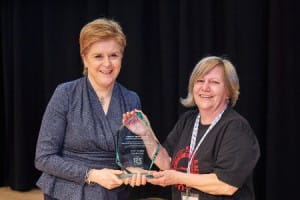 The recipient of the 2022 Learner of the Year Award was Joan Tasker, a member of Unite the Union.

The Scottish Trades Union Congress, which held its annual Congress in Aberdeen, awarded Joan with Learner of the year, recognising her achievements in union learning within the past year. SAMH worker Joan, who documented her struggle with dyslexia, has completed over 50 online learning courses through Unite the Union’s union learning programme. The award was presented by First Minister Nicola Sturgeon.

Commenting, Joan said “It’s a real privilege to receive this award and all credit must go to Unite the Union for their learning and development programme.

“The courses have empowered me not only as a worker but as a union representative. It’s also allowed me to come to terms with my dyslexia, breaking down barriers to attainment and showing a pathway to success for those who struggle with the condition. Education is lifelong and the volume of courses I’ve completed has allowed me to then give back to our members, supporting them through their own learning and development.

Commenting, STUC General Secretary Roz Foyer said: "Our annual Union Rep Awards celebrate the stalwarts of our movement and all those who have gone above and beyond in their workplaces this past year.

This year was no exception and Joan thoroughly deserves her award for being our top learner this past year. 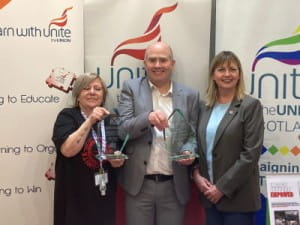 The sheer volume of courses Joan has completed is staggering. This not only helps her members but shows the dedication and commitment she has to the Unite the Unions learning and development programmes.

The Scottish Union Learning Learner of the Year Award short film further tells the story of the work undertaken by the award recipient Joan Tasker, it can be viewed here:

Further STUC films can be viewed on the STUC YouTube channel