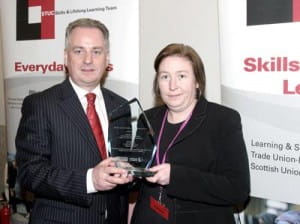 Rachael is a PCS Regional Learning Officer for HM Revenue and Customs in Cumbernauld. She has been pivotal in assisting PCS Scotland Learning Services in developing a sustainable learning structure within all of the HMRC branches in Scotland.

Rachael leads a team of over 60 ULRs, who support and organise learning for 11,000 union members. The award was presented by the then First Minister Jack McConnell MSP at the STUC Annual Congress held in Glasgow in April 2007.