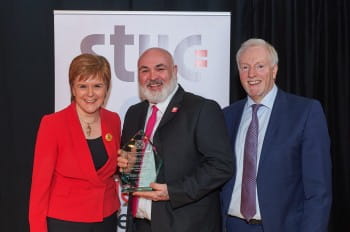 The recipient of the 14th Annual STUC Helen Dowie Award for Lifelong Learning was Chris McGill, a BFAWU Union Learning Rep at Warburtons in Bellshill.

Sponsored by The Open University in Scotland, and administered by Scottish Union Learning, the award was presented by the Rt Hon Nicola Sturgeon, First Minister of Scotland and Leader of the Scottish National Party, at the STUC Congress in Dundee on Wednesday, 17 April 2019.

Chris was a long-standing Health and Safety Representative within the Warburtons site before taking on the role of Union Learning Representative (ULR) at a time when there were virtually no learning or development opportunities available to the workforce.

He was instrumental in establishing a forum within Warburtons that allowed the employer and the union to meet formally to discuss workforce development. With support from Scottish Union Learning he has been able to address the learning needs of his members.

As a result of a survey of over 250 workers, Chris identified a need for Mental Health Awareness training and persuaded the employer of the potential benefits of this training. Chris secured release, which was difficult in a production-focused company, and as a result, the BFAWU delivered mental health awareness training for 100 workers. He also reached agreement with the employer that line managers and union reps would be trained as Mental Health First Aiders.

Chris organised events around Book Week Scotland and is in the process of establishing a workplace library and reading group. Chris also initiated a distance learning programme, plans to become a digital trainer, and has persuaded his employer that each department and shift will have a ULR.

Grahame Smith, STUC General Secretary, said: “We are very pleased to present this award to Chris in recognition of his outstanding contribution as a Union Learning Representative. Chris has successfully engaged both management and the workforce in the learning agenda at Warburtons, delivering a range of courses in line with the demands of his members. We congratulate him on his achievements so far, and wish him well in his continuing role as a ULR.”

Mark McHugh, Regional Officer, Bakers Food & Allied Workers Union said: “Chris has displayed passion, energy and commitment in his role as a ULR. He has had a very positive influence on his employer’s approach to learning and has succeeded in engaging the workforce in learning opportunities in the workplace.”

Susan Stewart, Director of The Open University in Scotland, said: “In a changing world of work, access to learning and skills development has never been more important. It’s a pleasure and totally appropriate for the OU to support the Helen Dowie Award for Lifelong Learning in this, the year of our fiftieth anniversary. Many congratulations to Chris who is a worthy winner of this award.”

The video of Chris McGill's story can be viewed here: