Learner of the Year Award 2011 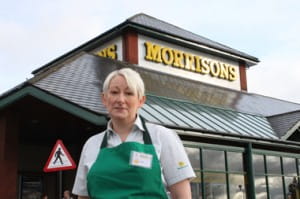 The first recipient of the Learner of the Year Award was Susan Manson, a cleaner at the Morrisons store in Airdrie. Susan was nominated by her union, USDAW, because her story is a powerful example of how union learning is supporting those who never thought learning was for them.

At a recent union-supported ‘Check Out Learning’ campaign day, Susan signed up for a Basic IT course. Susan said, “I always wanted to know more about computers, but I didn’t have the confidence to go to a college by myself. My USDAW Union Learning Reps organised this course in store, which was supported by the Learning Fund through Scottish Union Learning.”

Susan started the course, but soon felt out of her depth. She also felt like she was struggling to keep up with the other learners, a feeling she remembered all too well from school. A ULR in the store spoke with Susan and helped her to gain the confidence to speak with the tutor regarding her dyslexia, something she had kept secret for many years.

Ann Seagriff, USDAW Union Learning Rep, said, “We were happy to support Susan to overcome her struggles to be successful in this course. It involved a lot of encouragement, and sometimes a wee bit of a push, and we’re so proud that she’s got there in the end.”

Susan said, “For years, I had to rely on my husband or my son to read something for me. Now I just scan my mail into the computer and can deal with it myself. It’s so much nicer not to have to rely on anyone else – what I’ve learned with the support of my union has completely changed my life.”

She continued, “It was quite a shock to hear that I was going to be named as the Learner of the Year. I’m so pleased and just hope that other learners out there are encouraged to take a chance like I did – it’s worth it!”

Betty Spence, another USDAW Union Learning Rep at Morrisons, said, “Seeing the difference in Susan, and how much more confident she is now, is what makes being a Union Learning Rep worth the effort. We are so pleased Susan has been named Learner of the Year.”

Anne Douglas, Chair, Scottish Union Learning Board, said: “I am delighted to present Susan with the first Learner of the Year Award on behalf of the Scottish Union Learning Board. Congratulations are due to Susan, as well as to the many thousands of workers who undertake learning journeys throughout Scotland each year with the support of trade unions.”

Jill Little Woodhouse, USDAW Lifelong Learning Project Worker, said: “I am delighted that Susan has been recognised by Scottish Union Learning as its very first Learner of the Year. Susan’s learning journey is a powerful example of the massive benefits that Union Learning can bring into Scottish workplaces, and the massive personal changes that engaging with learning can bring about. With Susan representing the learners who have been supported across all the different Union Learning projects, USDAW is very proud of her and we hope to be able to support and celebrate the experiences of many more learners like her in the years to come.”