Learner of the Year Award 2013 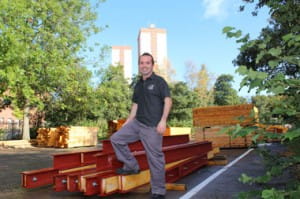 The recipient of the 2013 Learner of the Year Award was Paul Mitchell, a UCATT member at City Building in Glasgow. Paul was nominated by his union because his learning journey embodies how, through an individual’s hard work and with support from trade unions and employers, can change life for the better. Paul was presented with the Learner of the Year Award by Grahame Smith, STUC General Secretary, at the Scottish Union Learning Conference in Edinburgh on Wednesday 20 November 2013.

Paul began working at City Building in Glasgow in 1994. When being diagnosed with a repetitive strain injury five years ago meant that he could no longer work in painting and decorating, he began working in the offices of RSBi. It soon became apparent to Paul that his literacy skills were not up to scratch, and as an individual with dyslexia, he was apprehensive about learning due to his poor prior experience at school. Paul expressed his interest, as well as his apprehension, to the Learning Centre Manager, who in turn arranged for the Workers’ Educational Association (WEA) tutors to speak with him.

Support for Dyslexia Community the Union arranged for the WEA to deliver literacies provision for workers within RSBi, and Paul reluctantly enrolled. He received support for his dyslexia and progressed from taking literacy classes to IT learning, and he eventually received a Higher English qualification. From having extensive difficulties in basic reading and writing, Paul was given the support he needed by his tutors to expand his skills into other areas, such as poetry. Despite having initial misgivings about poetry, Paul has since entered his poems into Glasgow’s ‘Aye Write!’ Festival, where he received a standing ovation to a poem he had written about IVF treatment. Paul has even written a short book. To ensure he is qualified and for future job security, Paul began studying for an HNC in Construction Management in September 2013. Paul is now a champion for dyslexia to the wider community, delivers sessions on dyslexia awareness at his old primary school (with paid release from his employer) and has participated in radio/newspaper discussions on dyslexia. Team work Paul said, “This award isn’t just for me. It’s for everyone in the workplace, my tutors, my ULR and my workmates. It’s not just me that has achieved this honour, it’s also for the team that guided me in this direction on my learning journey.” Grahame Smith, STUC General Secretary, said: “Paul’s learning journey and the challenges he has overcome on the way are remarkable. With the support of his union UCATT, his employers City Building and his tutor, he has gone from being a reluctant learner, embarrassed about his dyslexia, to having his poetry acclaimed at Glasgow’s ‘Aye Right!’ Festival. As a Dyslexia Champion, he is an inspiration to those challenged by dyslexia in workplaces throughout Scotland to follow his example and to seek the support they need to help them fulfil their true potential. Due to the support provided by their union, thousands of workers across Scotland successfully undertake learning journeys every year. Paul’s story is an outstanding example of how union learning changes the lives of those it touches.” Harry Frew, Regional Secretary of UCATT Scotland, said: "This achievement proves that the work of UCATT and members such as Paul who are given the opportunity to develop through the union learning programme can surpass and progress into areas of learning which we thought were impossible." Audrey McJimpsey, RSBi Learning Centre Manager and Community Union Learning Rep, said: “Through his participation in union-led workplace learning, Paul has demonstrated tremendous professional and personal growth. As Paul’s ULR, I am delighted he has won the “Learner of the Year” award. His success is well deserved, and it will inspire other learners within the workplace.”