The objective of the STUC Equality Award is to highlight the positive difference union reps can make in the workplace. We aim to recognise an individual or group who has made a difference, and who brings energy, enthusiasm and new ideas to promoting equality and tackling discrimination. 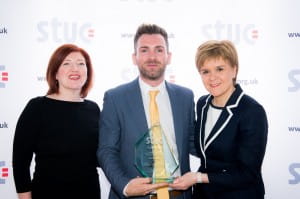 The Scottish Trades Union Congress (STUC) has announced that the recipient of the STUC Equality Award for 2016 is Scott Mowat, an EIS Equality Rep based at Mosspark Primary School in Glasgow.

The award, administered by Scottish Union Learning, will be presented today (11.00am on Tuesday, 19 April, Caird Hall, Dundee) by the Rt Hon Nicola Sturgeon, First Minister of Scotland and Leader of the Scottish National Party.

Scott has had an active role within the EIS since 2010, being elected as a delegate to the national AGM in 2013, 2014 and again in 2015. He was elected to the EIS National Equality Committee and has subsequently represented the EIS at national partner events, both as a delegate and as a panel guest, speaking on how schools might support LGBT teachers.